Hi, I’m trying to determine if my icinga2 satellites are overloaded or not with current checkload.

I’ve checked a few sources on the community (Number of devices monitored on Icinga, Capacity Planning - Best Practice For iCinga Master / Satellite - #4 by theFeu, Icinga2 at large scale - #7 by Solkren) and their reference source code (icinga2/checkercomponent.cpp at master · Icinga/icinga2 · GitHub, icinga2/icingachecktask.cpp at ee705bb110e802f8cafd21bab2d8697b0a538b0a · Icinga/icinga2 · GitHub); But I can’t get to understand the information.

I have following grafana graph for a HA Zone (to satellites running as many checks as configured) and its coresponding cpu% and cpu-load graph: 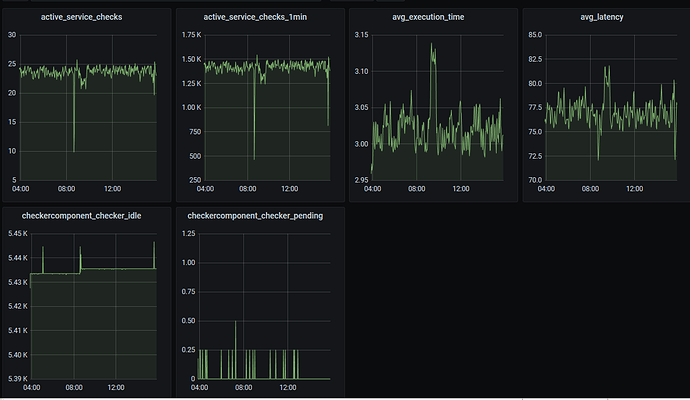 Your multiple snmp-cpu-load is reporting 1 and 15 min load averages and these hover at 3 in general. That number needs to ideally be less than the number of cores available to the monitoring system. I’m going to guess it has four or more.

The key things to watch on a Linux box are CPU%, load averages and “I/O wait” and RAM but lack of that will generally show itself in the other metrics. Run top and watch it for a while. Most of the stats are reasonably obvious but disk I/O wait is the number next to wa in the %CPU line. If that is constantly >0 then you may have a disc I/O problem. top is normally available out of the box but atop (advanced top) is a bit nifty because it will colour code potential problems for you. There is also htop generally available.

Overall I’d say all is well there. However to go deeper I need to know what rough specs you have - load averages only make sense when you know how many CPUs are in the box. Is this a VM? hyper threading enabled on the host? RAM?

Any Idea on the checkecomponent stats meaning and units?

Will look into IO stats, as memory seems to be quite oversized as compared to process utilization footprint.

Icinga 2 stores the scheduled start and end time for a check. If the actual check execution time differs from the scheduled time, e.g. due to performance problems or limited execution slots (concurrent checks), this value is stored and computed from inside the check result.

The difference between the two deltas is called check latency.

So actual latency means that, on average, the check starts 77 seconds AFTER time it as scheduled!

Is it safe to assume that checkercomponent_checker_idle is the count of checkables that can be scheduled? github code

Cant make out if code defines the checker_pending as a 0.5 seconds lock wait or a count of checkables result has not been received… would need some advise…

I have captured the checkercomponent_checker_pending average over the last 3 days on 4 satellites, left pair is one zone, right pair is another zone. Can anyone tell/explain what that value means?

Ps. as per this link, Could this be the count of checks the scheduler can not run yet ? (i.e, due to maxConcurrentChecks ??)