Umlauts and special characters in icingaweb2

I’m having trouble displaying umlauts and special characts (such as °) in icingaweb2.
I encounter this problem time and time again.

I already found out that Ubuntu 20.04+mariadb will use utf8mb4 as default when creating a database.
So I dropped both icinga2 and icingaweb2 databases, as it it as fresh setup with nearly nothing in it.
Then I recreated the databases with the following commands:

Both databases now have latin1 as default character set:

Even so I have done that and set the charset option of the resources to latin1, I still get BS in the webinterface

In the database all is displayed correctly: 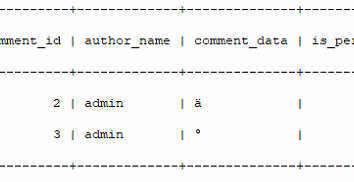 Anyone got any idea where to look next?

We have the same problem. Because we know this our “workarround” is to write ae instead of ä etc.

But I had an idea after you wrote schema “latin1” and did following steps:

Maybe a problem of the used charset with the database schema with the supported special characters?

Because I tested the umlauts also in the director. Here is everyhting fine:

And here is the big diffrence: The default charset from the director database is utf8!

I found two issues talking about the charset and icingaweb2:

Describe the bug Display names with (at least) äöüß get mangled. I'm using director, but i checked the icinga config files, those are...

In both it is said to “simply” set the charset of the ido resource to “latin1”, which I have done.
Also the first one (talking about the PR) is stating that it is bascially irrelevant what charset the DB itself has, as long as the IDO resource has “latin1” set as the charset. At least that’s what I understand from all the posts.

@nilmerg
Could you please share your thoughts on why the umlauts and special characters are still not correctly displayed, even though I have the “latin1” as the default charset of the resource config and the database itself?

I set the charset at the ressources from icingaweb and icinga to latin1. And it works!

For me it is a little bit incomprehensible why the director demands utf8 and icinga (web) latin1.

And as you wrote in the issue this hint should be written in the docs!

The character encoding is relevant as follows:

Icinga writes its data correctly into the database. The database accepts it then as latin1, though byte-wise it’s still UTF-8. If interpreted as such, as it’s then done by Icinga Web.

I know, it sounds strange at first, but think of latin1 as a 1:1 representation of Icinga’s data (raw bytes). The real encoding doesn’t matter at all, it’s all up to the reader to interpret it correctly.

The same is done by Icinga Web in its queries. That’s the reason why it is necessary to define latin1 as charset in the IDO’s resource. Only this way Icinga Web fetches the data in said 1:1 representation and can then interpret it as UTF-8.

Yes it’s weird. That’s usually the case with bad decisions made in the past and the necessity to be compatible with legacy installations. Recent products all make use of UTF-8 throughout the entire chain without such hacks/workarounds. (Director, Icinga DB, …)

So, that’s all for now regarding an explanation on how/why it works. I can only guess what the problem might be, but I’ll only repeat what works for me:

The last step is obsolete with v2.9, as then latin1 is the charset used by default for the IDO resource. (You’ve already linked the PR)

If this doesn’t work for you, make out any differences which may affect the processing that I described above. I hope this helps.

Thanks for your answer, much appreciated!

So what I am taking away from this is:

The only difference, as fas as I can see, is that I am using a different MySQL/MariaDB version.

Im installing via Ansible atm (to learn it

Anything under /usr/share/icinga2-ido-mysql/schema/upgrade/ is only needed when upgrading from a lower version and not when doing a new installation, correct?

Even though I think I am doing everything correctly the umlauts and special characters are still not displayed correctly. As said in my first post I even dropped the databases from the ansible install and re-did that by hand on the cli, still without success.

Anything under /usr/share/icinga2-ido-mysql/schema/upgrade/ is only needed when upgrading from a lower version and not when doing a new installation, correct?

How is the text with the umlauts and special chars transmitted to Icinga 2?
Could you please show an example text right from the database?

Could you please show an example text right from the database?

Here is how the checks are looking in the webinterface:

Maybe Icinga 2 just passes through what a plugin outputs without ever decoding it. You could try forcing the plugin to output UTF-8?

The check script is the following: check_redfish.py

at the beginning of the script, so I guess this should be UTF-8 output.

I also tried adding a comment with umlauts again:
The database has the following:

The coding comment in the python file’s header is only a hint for the interpreter that the file’s content is encoded with utf-8.

The encoding of an application’s output on linux is controlled by the locale if I’m not mistaken. So that should be changeable by adjusting the system’s default locale.

Your comment however should be UTF-8, if added by using the UI. Or did you add it somehow else?

Or did you add it somehow else?

Nope, added it via the webinterface.

Don’t know where else to look

Just a shot in the blue: Could you try creating the database without defining an explicit encoding/collation? Maybe it’s the database that’s doing things with your comments and plugin output.

Could you try creating the database without defining an explicit encoding/collation?

That’s how the database has been created the first time with the ansible play:

Thanks for your answer, much appreciated! So what I am taking away from this is: it doesn’t matter what the encoding was when the DB was created, as long as I put “latin1” in the IDO resource config The only difference, as fas as I can see, is that I am using a different MySQL/MariaDB version. Im installing via Ansible atm (to learn it

At least I don’t explicitly set anything but the name of the database when running the module and thus assuming it’s just using the mysql default, which is utf8mb4 on Ubuntu 20.04 and MariaDB

So the charsets of your database are those that I’ve shown here?

Okay, which MariaDB release exactly are you using?