No agents on master when config master is down

I have the setup as drawn in my beautiful colorful picture 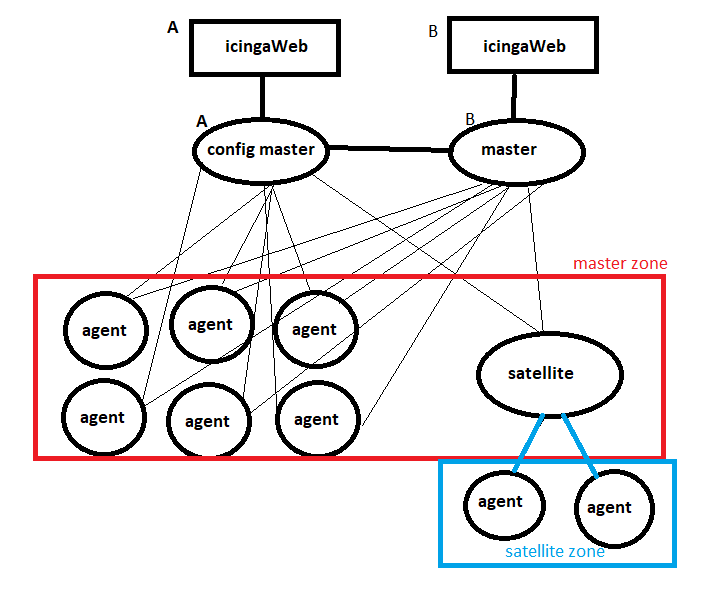 On my config master I have the zones.conf with all the (red) nodes and in “/zones.d/satellitezone/zones.conf” I have the (blue) agents.

If my config master is down the second master loses the connection to the two agents below the satellite.

What did I do wrong? I needed to fill the zones.conf at master B to get it working properly, but should I also create a zone manually on master B so master B will know about those when the config master A goes down ? What am I doing wrong here?

Everything else works perfectly! Thanks Icinga2 !

thanks for the picture, that helps

Can you please share the content of both zones.conf from both masters? I’d say that something is missing here.

Also, which connection direction is used for the agents? Is it the master connecting to them, or do they connect themselves? If the latter applies, they need to have the parent zone “master” configured with both master endpoints inside.

@dnsmichi thanks for your reply!

Compared the two using notepad++ and everything is exactly the same except for the 2nd master having a host ip of the config master. See below. (removed other endpoints as they are the same in both files)

I use the latter, so agents connect to the master. And yes, every agents has both master endpoints with ip and master zone with the two endpoints, see picture: 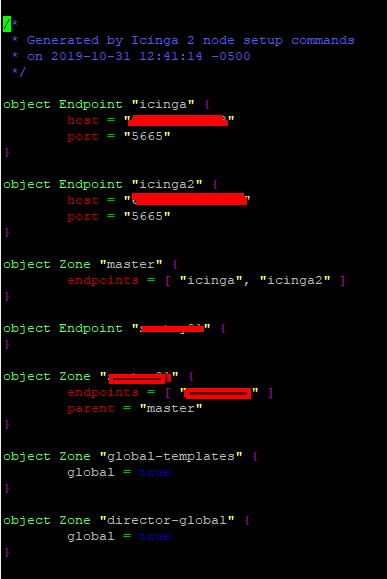 Tried to keep the colours for christmas 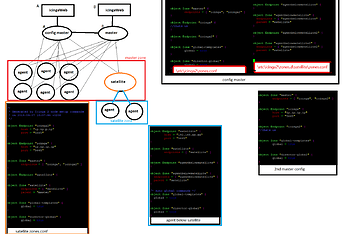 if I read the image and configuration correctly, the masters do not know about the satellite zone. Edit /etc/icinga2/zones.conf and add the following entries on both masters:

That is needed as otherwise both masters won’t trust the satellite zone, neither will they sync the configuration to that zone, including the agents below the master.

Sorry for the late reply, but didnt forget about it

The two (blue) were monitored correctly unless the config master is down like described above.

I really thought that adding a (blue) zone to the subfolder in zones.d was the right way to add a satellite with agents to it and that it would sync to other masters.

Would love to know how to solve this the way that is best. Any reference to a compleet example with two masters and satellites including agents and the according zones.conf would help to !

For now my satellite and two agents doesnt seem to recover and show an error in icinga web. The satellite cluster seems to be flapping. Files appear and disappear on the satellite looking at these two folders

I don’t know its content, but if there’s Zone/Endpoint objects for the satellite zone, I’d recommend moving them to /etc/icinga2/zones.conf 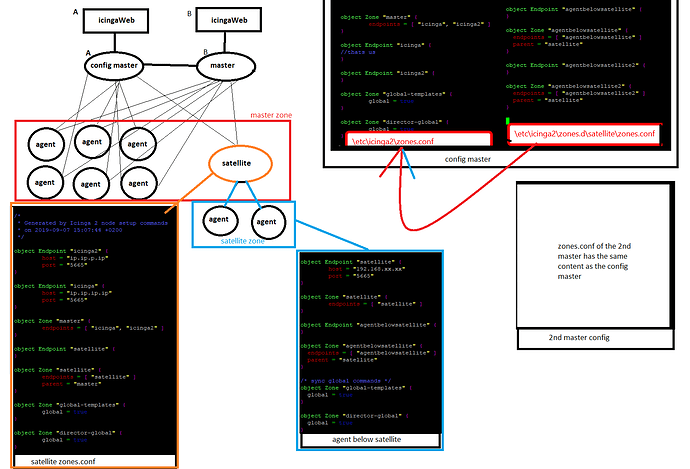 I thought that using a folder zone on the master would prevent this manual editing on the satellite ?

I thought that using a folder zone on the master would prevent this manual editing on the satellite ?

For indirectly connected zones over 3 levels, this works with regard of agents as command endpoints. Everything else needs to be configured inside the zones.conf for 1) allowing the zone trust levels 2) enabling the cluster config sync.

That being said, the master needs to know about the satellite zone, outside of zones.d, thus in zones.conf. That’s what’s written in the documentation too.

Sorry for starting to ask noob questions but what should I do now? (Dont completely understand what you are saying)

Is this assumption correct ? 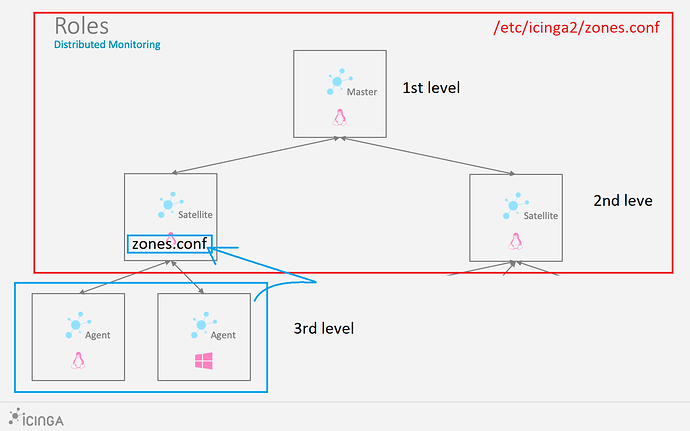 Do as suggested above, edit the zones.conf on the config master and the secondary master and add

Remove the objects which are colliding in /etc/icinga2/zones.d/satellite/zones.conf (you can also comment them out).

Btw, cleaning up /var/lib/icinga2/api on alot of clients seems to solve alot of problems but not all of them.

1#
Also, I previously disabled the 2nd master, enabling this 2nd master again solved the remaining cluster endpoint problems but when I stop the 2nd master service again, one agent on 3rd level gives the cluster error again. This behavious repeats when stopping and starting the 2nd master.
Shouldnt those automatically check for the other master ?

So now we are back to the original question, why do my two agents on the 3rd level disconnect when stopping the 2nd master?

So now we are back to the original question, why do my two agents on the 3rd level disconnect when stopping the 2nd master?

Do you have logs from all three levels and endpoints at the timestamp this happens?

I could choose a time and stop the second master then grep the log from the first master, satellite and two endpoints. That’s what you mean right? If yes, where to send them?