I’d like to setup a Notification Apply Rule in Director similar to this example in the Icinga2 docs:
https://icinga.com/docs/icinga-2/latest/doc/03-monitoring-basics/#notifications-users-from-hostservice

In short, I have a custom var in my host objects: host.vars.users
(Array of strings with usernames; corresponding to names of user objects; those come from an LDAP import source).

This is the Notification Apply Rule I made in Director:

I’d actually like to set, users = [ "myusername" ] to users = host.vars.users
Problem is: I can only set concrete usernames or usergroups via the Director UI. 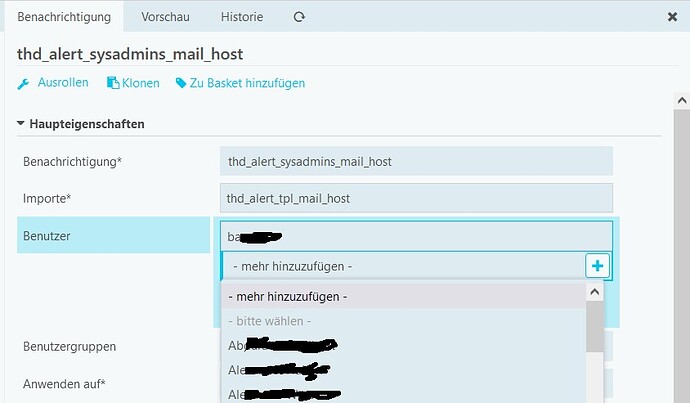 Am I looking in the wrong place? Maybe I need to fiddle with the plain Icinga2 conf & Kickstart?

Or would you know of a better way to assign notifications to users set in custom vars?

Well, I found a “working workaround”

Create a new Notification Apply Rule not in Director, but in plain Icinga2.

I’m not really happy with this workaround.

(Mixing and matching Icinga2- and Director-Config is bad style and prone to errors.)

Maybe somebody knows of a more elegant solution…?