let me first express what a fantastic piece of code the director and the import module is - mind-blowing, honestly.

I am actually playing around with some imports, like Meraki APs from a XML file, User from my Active Directory and my switches from a text file - which works pretty well.

But now I a stuck and have no idea how to realize this:

I have a csv-file with some MPLS router. I want to assign the geolocation automatically. Our hostnames start with 6 chars, beginning with the country and then the city, like UK-LON or DE-BER. Via a data list in director I can set the latitude and longitude into a field “location” which in the end get me a nice overview in Maps - so far so good.

But at one site I do have two datacenters, DE-BER-RZ1 and DE-BER-RZ2. This cannot be computed our of the hostname, so I added a field in the CSV file namd “dc”.

I also added this two location entries “DE-BER-RZ1” and “DE-BER-RZ2” to the data list.

What I want to do is this:

But I cannot find a conditionally modifier in “import Source”. I tried two import modifiers, but they just override each other.

Can someone please guide me in the right direction?

thanks for your quick reply. I am now working on this problem, but still cannot get it right.

I succeeded with one challenge though

Another property I want to set is the parent host.

All MPLS routers “depend” on the main-router where my icinga is running. So this object (MPLS-Router in main office" has a specific parent field set (“Core-Switch”) and this is imported.

In the first step (Import Source) the parent is set only for the UK-LON-MPLS-Router, which is fine.

In the second step (Sync Rule) is have this property rule: 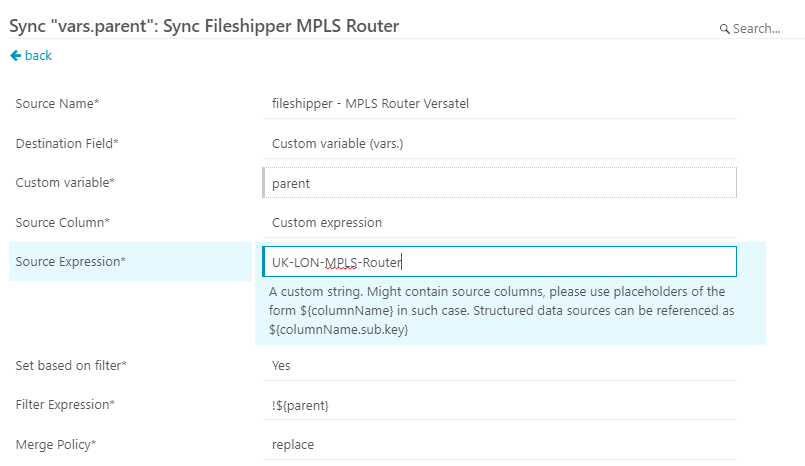 I set a Custom Expression “UK-LON-MPLS-Router” into the “parent” filed but this rule has a filter:

So it puts my Custom Expression only to parent IF the parent field is not set/empty.

And this works as expected, great.

But, as I said, I am stuck with the geolocation. I could use such a filter and set the site field, but would like to set the geolocation field from a data list and as far as I know, this is only possible in the Import Source step, right?

I hope I am on the right way.

I got it now… with the help of an auxiliary variable.

This is how I created the modifiers and rules:

But if the CSV-Entry also as a field “dc” for DataCenter,

In the second step, Sync Rules, I have setup two property rules:

The first one simply puts the content of the field “location” into the host object attribute “geolocation”:

The second one put the content of the field “dc_location” into the host object attribute “geolocation” only if the field dc is not empty:

This way, you have a great deal of flexibility when importing hosts via fileshipper.